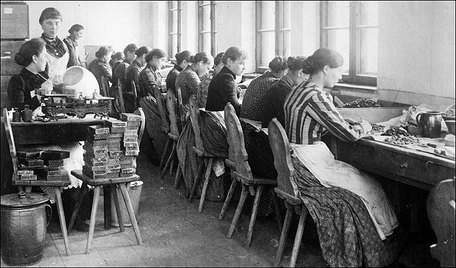 
While women today can aspire to nearly any profession, this was not always the case. In the early 1900s, women were able to select from only a limited number of occupations. During this period, women were generally charged with holding down the homestead and caring for numerous children born due to lack of birth control, leaving them little time for employment outside the home.

Teachers:
Teaching was one of the first fields open to women who wanted to work. Many unmarried women worked as teachers during the 1900s. Often, upon getting married, these women would leave the profession and act as full-time wives and mothers.

Dressmakers:
Those skilled with a needle could add to their household income by working as a dressmaker in the 1900s. Many dressmakers offered their services to women of high social class who did not possess the skill or time to craft their own garments, or to families in which none of the members possessed the skills necessary to sew clothing or mend tattered garments.

Nurses:
While women were not able to pursue many medical professions in the 1900s, they could often find employment as nurses. These women could work in hospitals or doctors offices, as well as near the battlefront during times of war. Just as with teaching, many women left the nursing profession upon getting married.

Domestic Service Workers:
Women of low-income levels who needed to contribute to their families' incomes often did so by working as domestic service workers. These workers would cook and clean for high-income families, or work as a nanny to tend to the family's children. In some cases, these workers were live-in, but in others the workers could commute daily to and from their place of work, spending their night hours at home with their own families.