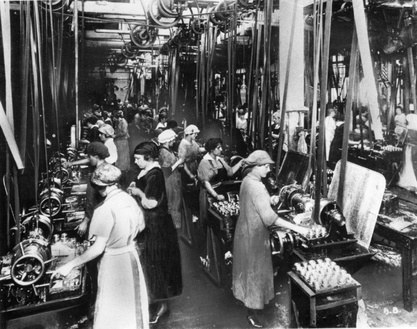 FACTORY WOMEN IN WWI:
The day the world changed was the day World War 1 began. The war began in August 1914. World War 1 was a pivotal time for women. This is because it gave women an opportunity to prove themselves in a male-dominated society, doing more than cleaning the house and tending to the children. With so many men going to war, there was a large gap in employment and, in response, women came in to replace the men. Some of the more well-known roles of women in WW1 include: nurses, munitions factory workers, sewing bandages, and selling war bonds, shipyards and spies. The Women's Royal Air Force was created, which is where women worked on planes as mechanics. By 1917 its was surveyed that 68% of women had changed jobs since the war began, 16% had moved out of domestic service, 22% that were unemployed in 1914 now had work and 23% had changed factories.