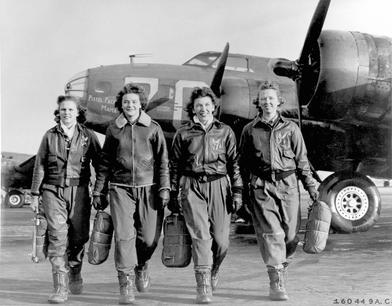 WOMEN IN THE WORKFORCE DURING WWII:
Women have always worked outside the home but never before in the numbers or with the same impact as they did in World War II. Prior to the war, most of the women that did work were from the lower working classes and many of these were minorities. There were a variety of attitudes towards women in the work force. Some thought they should only have jobs that men didn’t want while others felt women should give up their jobs so unemployed men could have a job, especially during the Great Depression. Still others held the view that women from the middle class or above should never lower themselves to go to work. These and other viewpoints would be challenged with the United States’ entry into World War II.

With men off to fight a worldwide war across the Atlantic and the Pacific, women were called to take their place on the production line. The War Manpower Commission, a Federal Agency established to increase the manufacture of war materials, had the task of recruiting women into employment vital to the war effort. Men’s attitude towards women in the work force was one challenge to overcome but, surprisingly, women’s own ideas about work outside the home had to change as well.

After the war, most women returned home, let go from their jobs. Their jobs, again, belonged to men. However, there were lasting effects. Women had proven that they could do the job and within a few decades, women in the workforce became a common sight. An immediate effect is often overlooked. These women had saved much of their wages since there was little to buy during the war. It was this money that helped serve as a down payment for a new home and helped launch the prosperity of the 1950s.